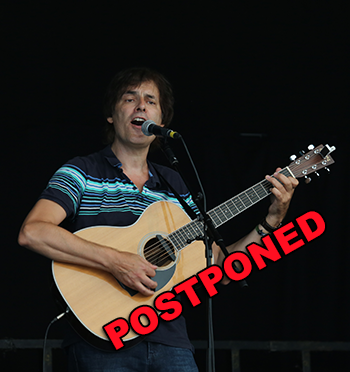 Bernard Hoskin is a songwriter, singer and multi-instrumentalist from Cambridge whose distinctive and original sound is based upon English song-writing and world music rhythms as well as the more common folk, country and blues styles. An experienced performer, he accompanies himself on 6 and 12 string guitars and mandolin playing a mixture of original and traditional songs and covers. He has produced twelve CDs.

Milkmaid Folk Club wrote of him: “Bernard treated us to a selection of his classic folksongs. All were delivered with consummate ease yet also with an unwavering passion and resolve as if it were their first public unveiling. His finger picking happily reminded me of some favourite guitarists who were playing in those crowded smoky clubs in the early 70s. His personal style of guitar work coupled with his friendly stage presence and lyrically engaging songs all made for an absorbing evening.”

“A great night, everyone enjoyed it, lovely songs brilliantly performed and some lovely stories to go with them” – Bradford on Avon Folk Club

“Bernard Hoskin was brilliant last night, ranging from haunting self penned numbers to Steve Goodman (for those of us old enough to remember and young enough not to forget). An accomplished performer on guitar and mandola, he instantly connected with the audience.” – Owd Boots Folk Club, Nottingham

“an incredible singer-songwriter, multi-instrumentalist who has released nine albums to date and has supported many famous names, past and present, whilst simultaneously establishing himself as one of the finest male solo artists working in the contemporary folk music field today.” – Beverley Folk Club

“Singer, songwriter and guitarist Bernard performs songs with the unhurried, slightly wistful, airy, summery feel of classic 60s folk singer-songwriters, creating a reflective, gentle and fundamentally positive space, which it was a treat to inhabit during his deservedly well-received set.” – Rychard Carrington, Slatethedisco.com