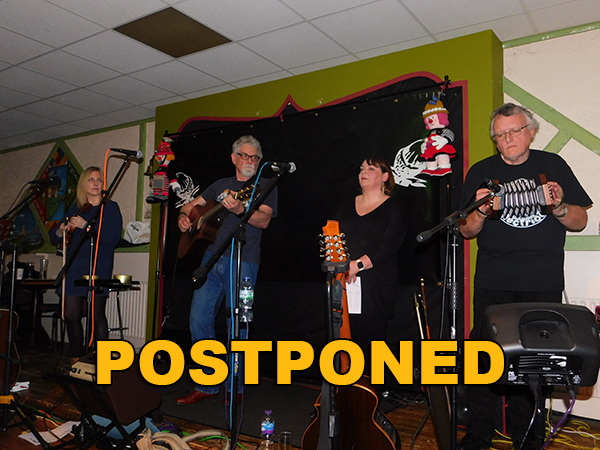 The first, but short lived, line-up included John, daughter Emma with new members Mat Taylor on double bass and sax and Emily Sanders on fiddle and vocals. Emily left to work on her own band and was replaced by Allie Fellows on piano accordion and keyboards.

This line up recorded the 4 track CD ‘If you can walk you can dance’ with Mick Dolan in 2004. Mat Taylor left and John decided to team up again with old friends Jim Sutton and Chris Drinan, who having been members of Maurice and the Minors and the original Desperate Men line up were entirely familiar with John’s work and who are extremely talented in respect of both performance and working on arrangements.

Back to a five piece again the band recorded three CDs with this latest line-up. The first was ‘Walls of Hope’ in 2006, then a four track sampler in 2007, followed by ‘For Love nor Money’ in 2008. All were engineered and produced by Mick Dolan with John Acock also helping out on ‘For Love nor Money’ because of Mick’s ill health.

Allie left the band for pastures new and Julia Disney joined in February 2010 playing fiddle, keyboard and vocals. Wanting to do some post graduate education Julia left in 2011 and the band were this time lucky enough to find another very talented young musician, Robin Tudor in late 2011 who also played fiddle and keyboards.

John had written a number of new songs and in 2012 the band decided to work on a new CD which was called ‘The Lifeboat’. Both Robin and Julia were involved in the recordings for this CD, which was once again engineered and produced by Mick Dolan. The band launched the new CD in January 2013.

After a decision to call it a day in 2014, the band are now performing again.