Originating with a casual comment at a party, Atherstone Folk Club came back into being in 2013, with the first event planned for September that year. 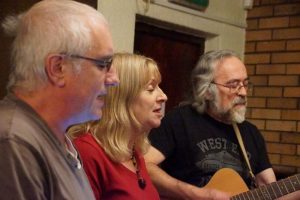 The collective name was arrived at as a gentle dig at traditional folk tunes, with a slightly deeper meaning explained in the words penned by Steve!

Anne played guitar and sang in folk clubs in the 60s and 70s.  She ran a school recorder consort and still teaches guitar to primary school children.

Her claim to fame is that she once borrowed Al Stewart’s capo!

Steve played and sang in the same folk group with Anne and others in the 60s and 70s.  He continues to play and sing regularly and is a prolific song writer.

Phil has been involved in folk since the 60s, albeit with a 20-year break from active involvement.  In the early 70s, he was part of an electric folk group, Alderley Edge, with Malc Gurnham and David Parr, performing all over the Midlands area.

He also got together with David Parr in a more traditional folk trio with John Meechan.  Coolin, as they were known, perfomed even further afield; they even managed to get to Pontefract one memorable evening!

When Nuneaton Arts Centre was being set up, Phil got involved, so it was no surprise that Coolin were the hosts of the folk club that opened there.